Richard Landis is a weaver but his visual language is that of an abstract painter. His intricate designs and subtle color blending are built on the intrinsic grid of weaving’s warp and weft, using the vertical and horizontal interaction of threads on the loom, to create patterns that offer endless variety—reiteration without repetition. A masterful colorist, Landis calculates every possible full and half tone within a defined set of colors, weaving with fine sewing thread to ensure subtle color blending. In his preferred weave structure—double cloth—is two parallel planes of fabric are woven simultaneously, which enables multicolored complex patterning with a relatively simple hand loom. The works in this gallery reveal the evolution of the designer’s thinking about complex color and pattern interaction over the span of his career. While the actual weaving could be completed in days, it sometimes took Landis a month or more to design the pattern and prepare the loom. In correspondence about his design process, Landis wrote, “When people asked me if I used a computer—which they often did—I told them I use the loom as a computer.” If the loom is the computer, then Landis is the programmer. He decided early in his career to embrace the “tyranny of the loom,” but to challenge it, too. The loom is designed to facilitate repetition, but Landis recalled, “I realized that repeats added no information and had to go. I began searching for systems that would deliver total variation and surprise.” Nature has been a profound influence on Landis. He has spent a lifetime fly-fishing, hunting, backpacking, and gardening, and is attuned to complex interactions in the natural world. According to Landis, “Being comfortable in big complexities allows you to do complex things—and to see them.” His goal is a unity of interior structure and exterior appearance. In these luminous woven works, as Landis affirms, “the canvas is the painting.” #RichardLandis

“Window blocks” is a traditional double cloth pattern, but Landis pushes its design capabilities by developing complex color systems in both the windows and frame. With a nod to Josef Albers’s Homage to the Square paintings, he lines each side of each window with a contrasting color, shifting our perception of the colors within.

The six-color palette of this early work includes black and white, along with strong reds, blues, and yellows. The crisply delineated full tones have the sparkle of sharp dark and light contrasts. The halftones, many of which are mixtures of warm and cool shades, are soft, and appear out of focus. 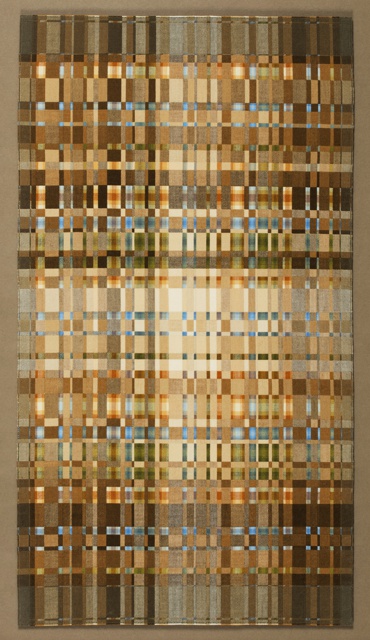 In many of Landis’s works, all of the colors are fully integrated across the entire surface. In this piece, pure blue, green, and orange are confined to tiny, faceted, jewel-like blocks of color couched in a matrix of neutral tans. 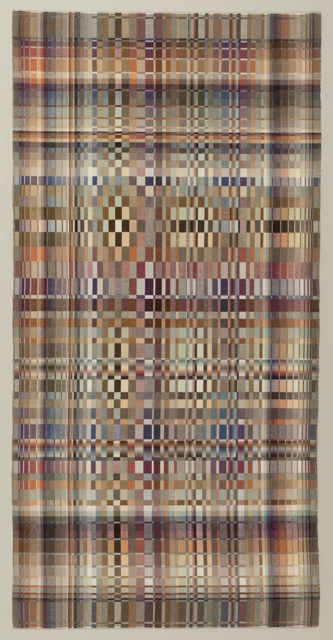 In this radiant composition, a grid of narrow bands forms an implied frame. Full tones and larger forms are clustered in the center, giving a feeling of brilliant openness and clarity, much like a stained glass window. 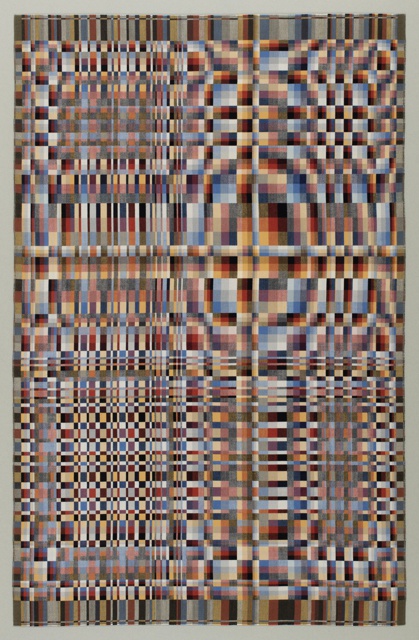 Landis compares this piece to a symphony, with four “movements,” defined by the obvious cross. A “shadow” is formed by graduating the colors from light to dark in one pattern and from dark to light in the adjacent area, creating the illusion of a 3-dimensional form hovering above the surface. 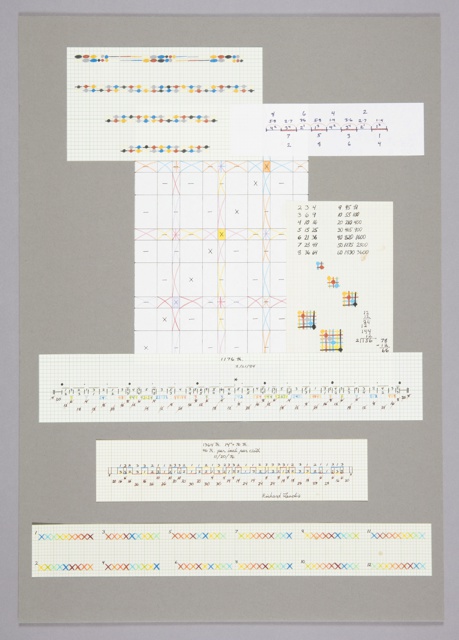 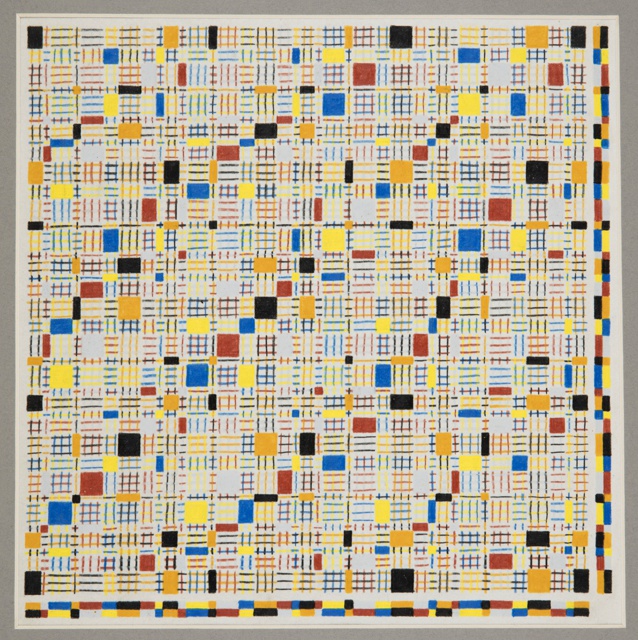 Program Drawing To Determine The Alignment Of Full Tones

This early drawing shows the artist painstakingly working out every possible color interaction, with the full tones—where a weft crosses a warp of the same color—rendered as solid squares. “Though I had no computer, I always felt that while I was designing, working out setups and then weaving them off, that I was in the field of computation,” the artist has said.

This early weaving displays many of the concepts that undergird Landis’s work: small, medium, and large rectangles repeat in ever-changing order, and every possible color combination is played out both horizontally and vertically. The movement of the full tones around the field give the piece energy and dynamism. 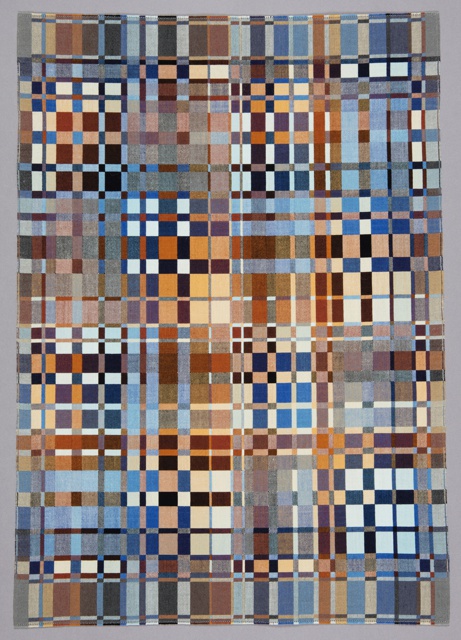 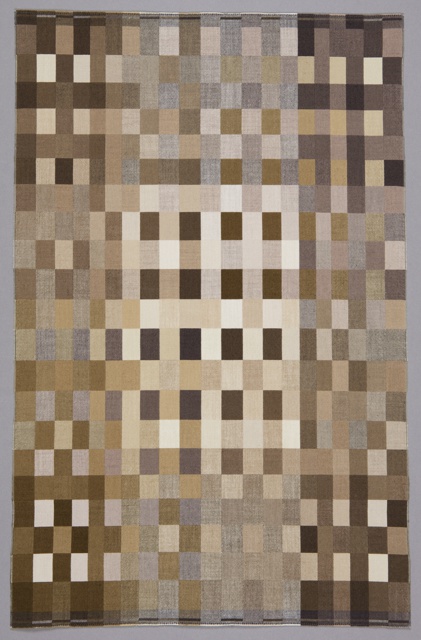 Red + Green is composed of imperfect grays—not the neutral grays achieved by combining black and white, but rather de-saturated colors, created through mixtures of the complementary colors red and green—here a range of olive and khaki greens with rosy taupes and ruddy browns. 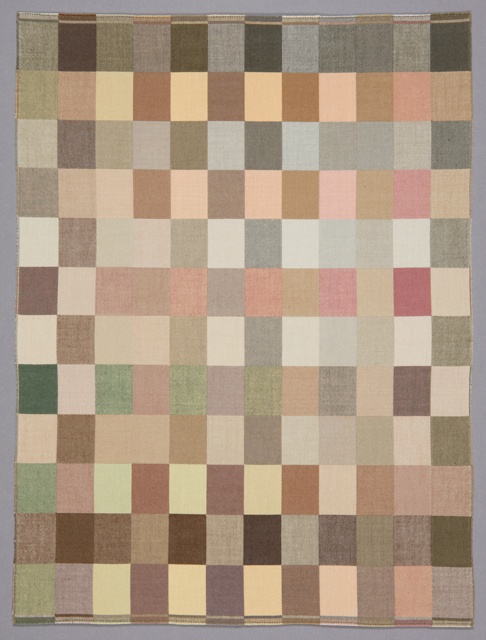 This serene and elegant composition is deceptively complex. Every rectangle in this seemingly simple checkerboard pattern is a slightly different tone and hue—a fully developed color range of remarkable depth and delicacy. 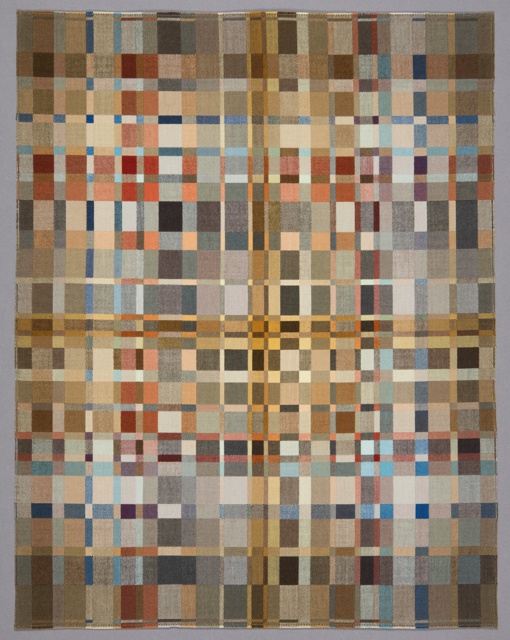 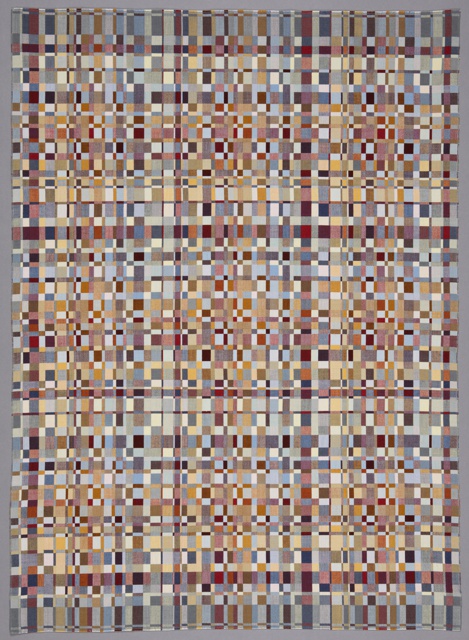 The twelve-color palette of Campo di Fiori is woven so that all seventy-eight possible full and half tones are expressed in a composition of nine pattern areas, each of which seems to have its own center and its own logic. The title refers to the 16th-century Italian mathematician and cosmologist Giordano Bruno, who was martyred there. 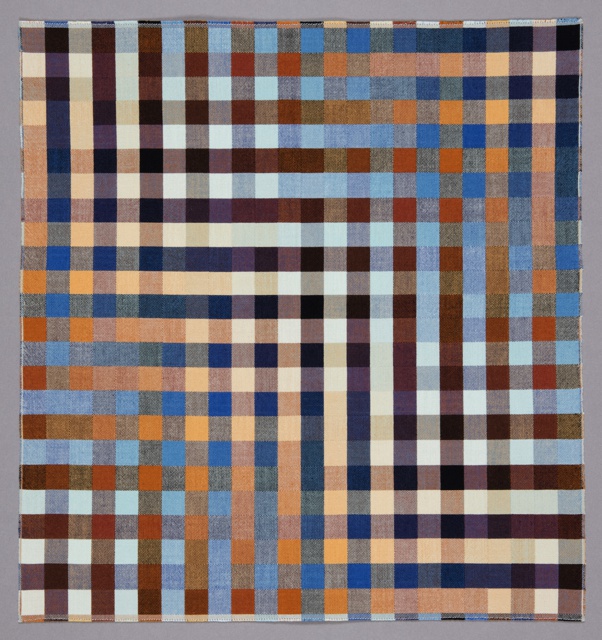 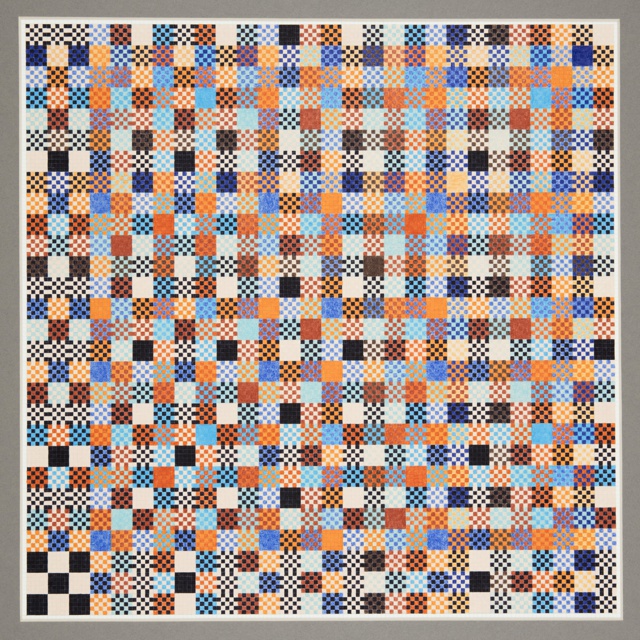 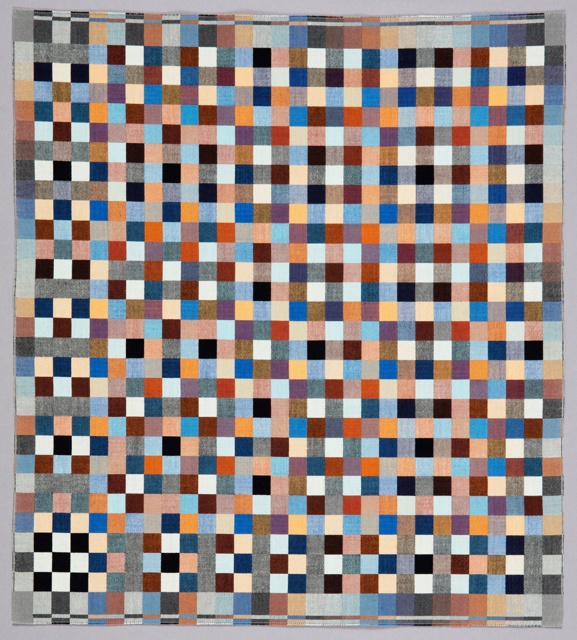 Nucleus and Signal are the result of Landis’s only collaborative work, created with graphic designer Craig Fuller. A subtle symmetry is created by precisely repeating the same color sequence in the warp and weft. What may appear a random arrangement of colored squares is a balanced and controlled expression of a well-modulated palette. 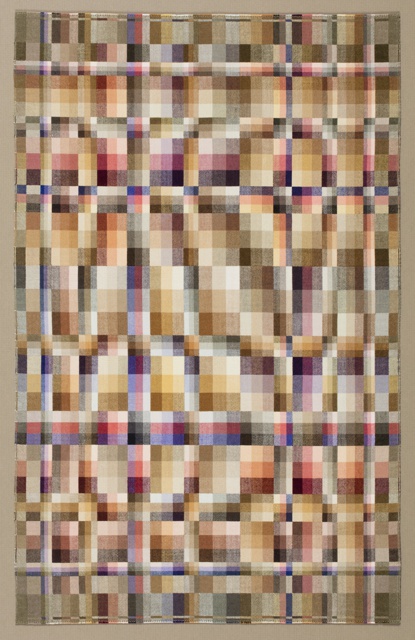 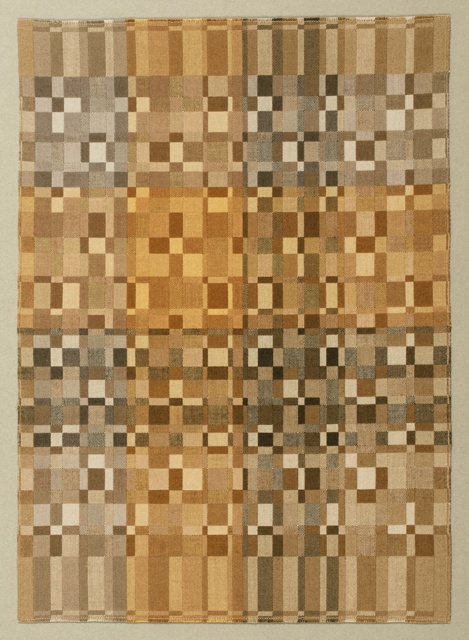 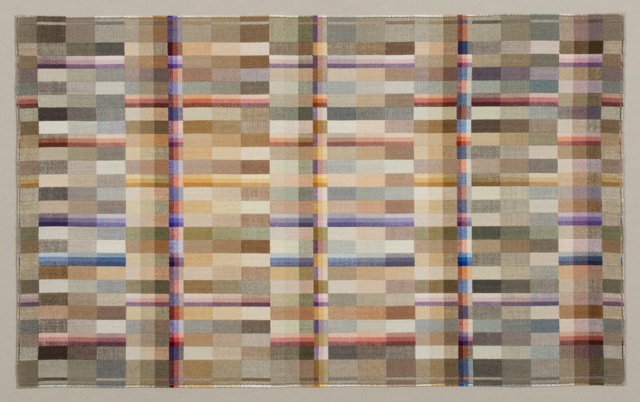 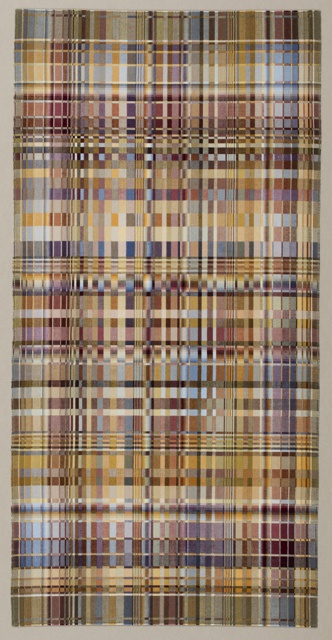