Jewelry designer David Bielander was apprenticed to goldsmith Kurt Degen in Basel, Switzerland between 1989 and 1993. He then worked for jeweler and industrial designer Georg Spreng from 1993 to 1995 in Schwäbisch Gmünd, Germany. He pursued further studies for six years under Otto Künzli at the Academy of Fine Arts in Munich, receiving his masters diploma in 2002. From 2006 to 2010 he served as Artistic Assistant to Professor Daniel Kruger at the Academy of Fine Arts Burg Giebichenstein, Halle, Germany, and then as an external consultant to the jewelry department at the Gerrit Rietveld Academie in Amsterdam from 2011 to 2013. Bielander’s jewelry, often depicting ‘common things’, particularly... more.

We have one object that David Bielander has been involved with. 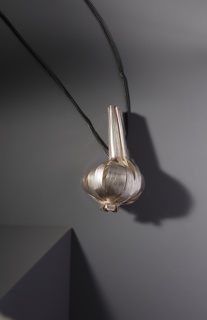 We know 2 people that David Bielander is related to.