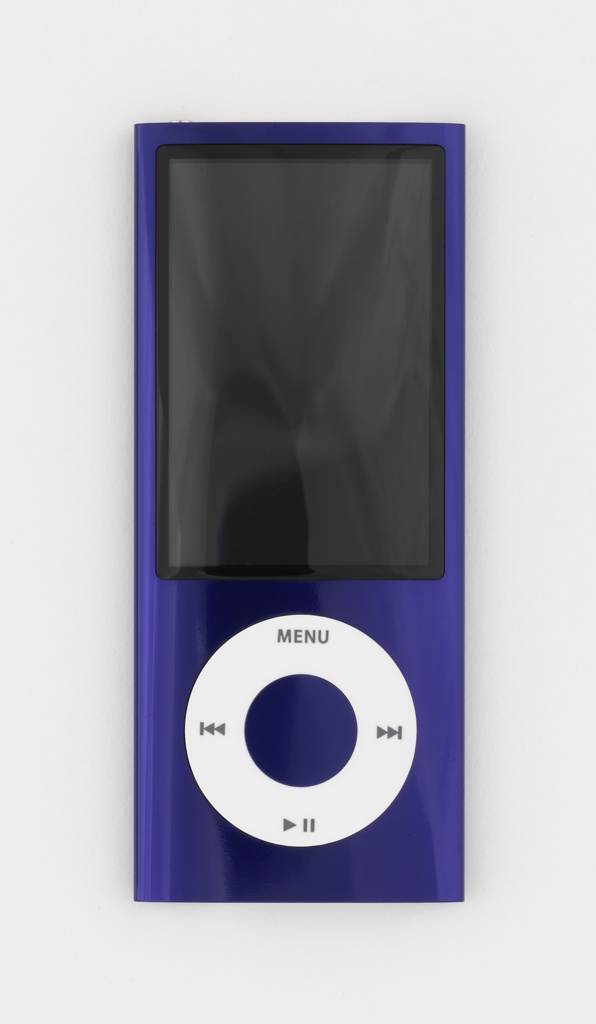 There are 3 other images of this object. See our image rights statement.

This is a Digital media player. It was designed by Apple Industrial Design Team and manufactured by Apple Inc. and the design director was Jonathan Ive and firm: Apple Inc.. It is dated 2009 and we acquired it in 2010. Its medium is polished anodized aluminum, arsenic-free glass, molded polycarbonate resin. It is a part of the Product Design and Decorative Arts department.

Apple’s iPod and its variants, including the Nano, are among the most influential personal appliances of the early 21st century. The iPod has brought cultural shifts in our relationship to music and communications in the 21st century. Innovative technology makes it possible to store, carry, and share music, pictures, video, and movies with these increasingly diminutive and powerful portable devices. The iPod lineup is significant for its up-to-the-minute technology and increasing miniaturization. Multiple functions are integrated into models smaller than a deck of cards or a tube of lipstick. Furthermore, the devices connect technology with fashion via color: Apple has created a color spectrum for the Nano that reflects contemporary taste.
Apple Computer, Inc., founded in 1976, by Stephen Wozniak and Steve Jobs, was well established as an innovator in the personal computer field by the time British designer, Jonathan Ive, joined the company in 1992. Ive rose to become the Senior Vice President of Industrial Design and, under his design direction in 1998–99, Apple introduced the iMac and iBook personal computer and laptop lines noted for their bulging, translucent, gumdrop-colored housings. By 2001, the year the iPod was introduced as Apple’s entry into the growing personal digital music player market, Ive’s designs had shifted to a more minimalist aesthetic. The sleek, smooth forms in titanium or aluminum used for Apple’s powerful computer products were geared toward the business world, while glossy white casings were intended for the consumer market. The original iPod, with its iconic thin rectangular shape, white face, and chrome-colored back, characterized this style.
Building on the iPod’s technology and success, Apple introduced the first of its smaller iterations, the iPod Mini, in 2004. The Mini featured a smaller, slimmer rectangular body that was enlivened by color. By 2005, however, Apple replaced the Mini with the Nano, available in only white or black, echoing the original iPod form and minimal color scheme.
The updated Nano released in 2009 reflects developments in technology and miniaturization, as well as changes in consumer expectations for personal electronic devices and their evolution as “lifestyle tools.” The device is no longer just a music player; it has a microphone, FM radio tuner, and can store and play visual media such as videos and movies on a color display above the click wheel control. There is also a built in video camera and, for the fitness-minded, a pedometer. The small, sleek, anodized aluminum form is highly portable and comfortable to hold, and comes in nine deep jewel tones.
At the time of proposed acquisition, the museum has a number of Apple products in its collection. The exhibition, Design USA: Contemporary Innovation (2009–10), which celebrates the 10th anniversary of the National Design Awards, included the latest Nano to represent both Apple as the National Design Award (NDA) winner for Corporate Achievement in 2000, and Ive as the NDA winner for Product Design in 2007. Models in several colors are proposed for acquisition to show a range of consumer choices for these ubiquitous personal digital accessories. The iPod technology and Apple’s distinctive, universally recognizable designs make these portable media players important in the continuum of industrial design, a major category for the museum’s collection that includes audio recording and playback devices.

This object was previously on display as a part of the exhibitions Saturated: The Allure and Science of Color and Design USA: Contemporary Innovation.