He trained as an industrial designer. She studied graphic design. Adriaan Hugo (South African, b. 1982) and Katy Taplin (South African, b. 1982) founded Dokter and Misses in 2007 in Johannesburg. The duo is best known for furniture, objects, and lighting inspired by, among other things, the culture of their continent. While their earlier works displayed bold lines and forms associated with South Africa’s modernist architecture, Dokter and Misses’s more recent Kassena series (2015) takes its inspiration from the intricately painted adobe homes of the Kassena people of northern Ghana and Burkina Faso. The original Kassena Server (2013) has an edition of fifteen, produced in one shape that incorporates... more.

We have one object that Dokter and Misses has been involved with. 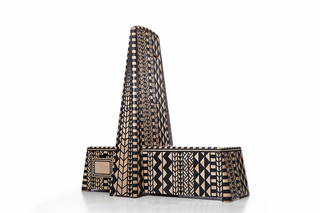