Polzer was born in Brockersdorf Austria on May 1, 1878. He arrived in New York in 1903. He married Susanna Blako on October 26, 1907 and they eventually resided in Norwalk, Connecticut. In 1918 when Polzer registered for the World War I draft he listed his current occupation as a “machinist” at the Greenfield Manufacturing Company. In 1921, Polzer became associated with the E.H. Hotchkiss Company, a leading manufacturer of stapling machines in Norwalk, until at least 1944. He is the holder of multiple patents for stapler-related devices.

We have one object that Fridolin Polzer has been involved with. 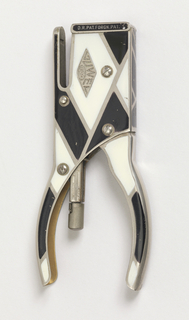