Born September 12, 1912, Spokane, Washington; died February 22, 2002, Corona del Mar, California. Moved with family to Hollywood as a boy. Worked as a child extra in Mack Sennett comedies. Attended the Chouinard Institute. Animator and film director. Created the cartoon characters Road Runner and Wile E. Coyote, beginning in 1949. Said that the Coyote character was based on Mark Twain's "Roughing It." 1933-63 Warner Brothers. Within the Looney Tunes and Merry Melodies film productions, in collaboration with Tex Avery, Fritz Freleng and others, created Bugs Bunny, with whose design Jones was associated for fifty years, as well as Daffy Duck, Porky Pig and Elmer Fudd. 1938 Directed his first cartoon, "The... more.

We have one object that Chuck Jones has been involved with. 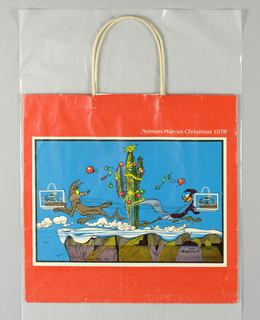