Harwood Steiger (American 1900 – 1980) and his wife Sophie (American, ? – 1980) ran the Tubac Steiger Studio in Tubac Arizona, producing screen-printed fabrics which became synonymous with the Southwestern style in the post-World War II era. While studying art at the Rochester Institute of Technology, Harwood Steiger took his first job as a colorist in a textile dye factory, which inspired and informed his future interest in textile printing. He went on to study at the Pennsylvania Academy of Fine Arts, and in the 1920s he moved to New York, where he opened a studio and began teaching classes. In the 1930s, he started a summer art school on Martha’s Vineyard called the Steiger Paint Group. His work... more.

We have 2 objects that Harwood Steiger has been involved with. 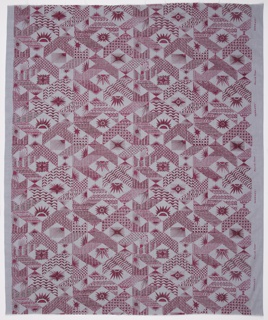