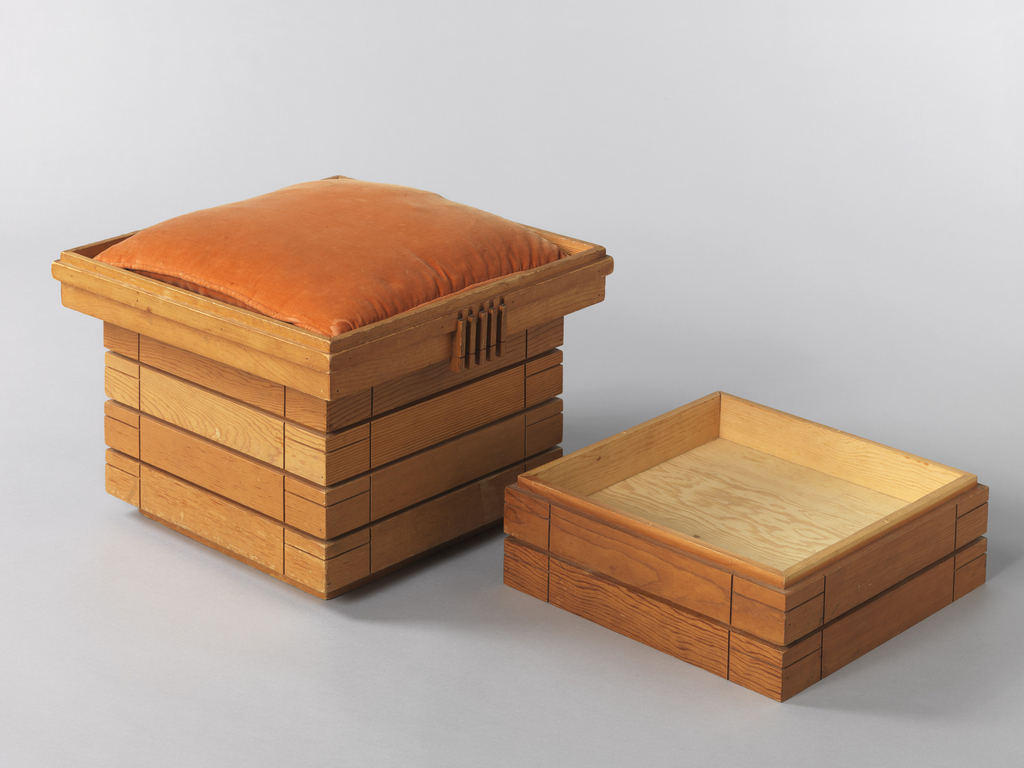 See more objects with the color peru saddlebrown sienna darkolivegreen burlywood or see all the colors for this object.

This is a Stool and cushion. It was designed by E. Fay Jones. It is dated ca. 1955 and we acquired it in 2005. Its medium is pine plywood, fabric. It is a part of the Product Design and Decorative Arts department.

Noted American architect, E. Fay Jones, was a pupil of Frank Lloyd Wright. Jones is primarily known as the creator of the Ozark style of architecture, although his buildings are located throughout the United States. His designs for houses, chapels, and churches are hailed as organic and site-sensitive. Influenced by his training under Wright, the designs often rely on cedar siding, shingles, and stone. Jones is probably best known for the Thorncrown Chapel (built 1980) in the Ozark Mountains of Arkansas. In 2000, the tall, light, tensile structure of glass, wood, and stone was voted the fourth-best building of the 20th century by the American Institute of Architects. In 1980, Jones won a Rome Prize Fellowship and, in 1990, he received the American Institute of Architects Gold Medal. Although his work shows an affinity for Wright’s approach and designs, Jones’s designs have a character of their own. They manifest his passion for the history of architecture, his engineering background, his eye for pragmatic detail, and his concern for needs of the client.
This stool is from Jones’s own residence, his first building, which he designed in 1955. Jones also designed most of the furnishings. Like his house, the furnishings are marked by an elegant visual simplicity and structural clarity reliant on strong geometric forms and subtle, minimal, linear embellishment. The stool is part of a suite for use around the Joneses’ dining table and in the living room. Economical in concept and execution, the form is simply a stack of hollow plywood boxes with a lift-off lid topped with a cushion. The simple incised lines and moldings applied to the seat amplify the elegant rectilinear quality of the form. The boxes were also designed to serve as storage containers, some with square frames that could be mixed and matched and stacked to any height. According to Jones’s wife, a local cabinet shop constructed the components at a cost of $4 per stool.
This stool would add to our American 20th-century architect-designed seating and to our group of multi-function furniture.
References:
Robert Adams Ivy, Fay Jones: the architecture of E. Fay Jones, FAIA (Washington, D.C.: American Institute of Architects Press, 1992), 103, 105.
Roy Reed, “Fay Jones, 83, Architect Influenced by Wright, Dies,” The New York Times, September 1, 2004, http://www.nytimes.com/2004/09/01/arts/design/01jones.html