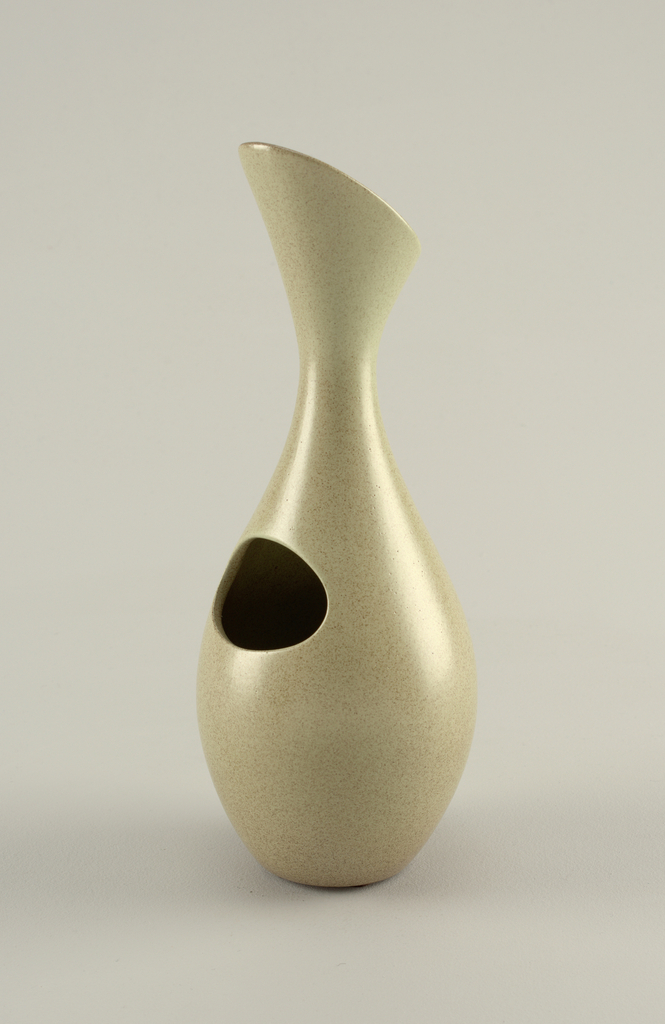 See more objects with the color saddlebrown sienna rosybrown rosybrown or see all the colors for this object.

This is a Vase. It was manufactured by Heath Ceramics. It is dated 2003 and we acquired it in 2004. Its medium is molded and glazed earthenware. It is a part of the Product Design and Decorative Arts department.

This vase is one of four by the artist and designer Roy McMakin under consideration for acquisition. McMakin’s furniture was included in Cooper-Hewitt’s first National Design Triennial in 2000, Design Culture Now.
McMakin is known primarily as a furniture designer and founder of the Seattle-based firm, Domestic Furniture, which he opened in Los Angeles in 1987. Born in Wyoming in 1956, McMakin trained as an artist at the University of California, San Diego, where he earned an MFA. His furniture has been called “hybrid” in the sense that his forms are clean, simple, and unembellished, evocative of a range of earlier styles, including Shaker, Arts and Crafts, and modern. McMakin combines elements and proportions in an ambiguous way, provoking the user to think about aesthetic sensibilities, style, and their own recollection of style. McMakin gained recognition when the Getty Center chose to furnish their administrative offices with his designs.
As with his furniture designs, this vase plays with scale, detail, and color to elicit what McMakin terms "non-specific memory” of familiar styles and meditations on accepted notions of function and good design. This vase is part of a series of ceramic forms, about which McMakin said that, in addition to embodying his aesthetic, he simply wanted to make vases that he liked, and which met several visual and conceptual criteria: they should become more interesting when holding flowers and, like flowers before they fade and wilt, they should enjoy a “fleeting moment of glory.” The forms should also evoke an idea of loss and redemption—despite a missing part, or being employed for an unintended or seemingly trivial function, they are still fit for use.
Although the ceramics series was produced in 2003, McMakin explained that idea for the project started many years before. In the 1980s, while based in California, he became acquainted with people at the Heath Ceramics in Sausalito. The company was founded by the mid-20th-century ceramist, Edith Heath, who was first celebrated for her Bauhaus-style ceramics in the late 1930s and early 1940s. Heath started the company in 1947 as an effort to combine the simplicity of form and glaze embodied in the work of craft potters with industrially mass-produced wares. She formulated a durable stoneware clay and distinctive glazes for her products. Several Heath dining ware patterns and glazed tiles became classics of the mid-20th-century “California style,” which emphasized a warm informality and ease of use.
By the early 21st century, however, the elderly Heath was no longer running the firm and it was experiencing a decline in business. Designers Robin Petravic and Catherine Bailey, with backgrounds in engineering and product design, respectively, became interested in the company and purchased it in 2003. That same year, they decided to revive several classic Heath models by inviting contemporary designers to create updated interpretations. McMakin’s designs are a part of this group. McMakin particularly liked the qualities of the Heath clay and the repertoire of Heath’s earthy glaze colors, some of which had been discontinued but were revived for this production. According to McMakin, this vase and the other vases in the series could be considered “artist’s proofs”; they were produced in these glazes for only one year. Heath may continue to produce McMakin’s vases, but would limit the range of shapes and produce them in only three glazes—matte brown, redwood, and celadon—and offer the vases only in sets.
This vase, together with three other vases in the series, is being offered as a gift by interior designer Agnes Bourne. The vases would be Cooper-Hewitt’s first Heath pieces and among the first to represent 21st-century ceramic design. These forms could also be seen as examples of a late 20th–early 21st century wry, irreverent aesthetic—in contrast to and playing off of the "sincere" ancient to modern vessel forms in the collection.

It is credited Gift of Agnes Bourne.