Felieke van der Leest was born in 1968 in the Netherlands. She attended the Gerrit Rietveld Academy in Amsterdam, graduating in 1996 with a degree in Jewelry Design. Since 2008, she has lived and worked in Norway. She has had numerous solo exhibitions around the world. She incorporates found objects with handcrafted textiles and metalwork in playful and thought provoking ways, and often features animals, which unite and unify her oeuvre. A combination of play and seriousness can be found in her metalwork and jewelry; while her pieces are generally light in spirit, some of her work addresses issues relating to the poor or abusive treatment of animals.

We have one object that Felieke van der Leest has been involved with. 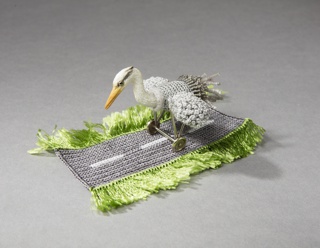 We know 1 people that Felieke van der Leest is related to.