Born in Oil City, Pennsylvania in 1960, Sandra Enterline graduated with an Associates Degree in Jewelry and Metalsmithing from the Rochester Institute of Technology, School for American Crafts in 1980. She went on to earn a BFA in Metalsmithing from the Rhode Island School of Design in 1983. In addition to her studio work, Enterline gives lectures on her craft and conducts metalsmithing workshops. From 1991 to 1992, she held visiting professor and visiting artist positions at the School of the Museum of Fine Arts and the Massachusetts College of Art and Design, respectively. Currently, she guest lectures at universities in the San Francisco Bay Area, including the Academy of Art University and the California... more.

We have 2 objects that Sandra Enterline has been involved with. 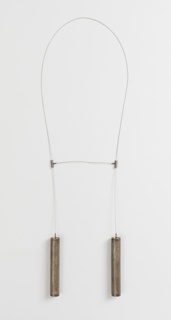 We know 1 people that Sandra Enterline is related to.