Keith Lo Bue was born in Fairfax, Virginia in 1964. He graduated with a B.F.A. from State University of New York, Purchase, in 1986. Between 1989 and 2005, he held solo exhibitions across the United States, and his work has been included in group exhibitions in the United States and Australia. In 2009, he mounted the solo exhibition "Why the Wind Blows and Other Popular Delusions" in Queensland, Australia. Lo Bue relocated from the United States to Australia several years ago. Known for his jewelry constructed from found objects, Lo Bue said the following about his inspiration and work: "I like to think my materials find me! As I walk around out there in the world, things will fall into view that stop me,... more.

We have one object that Keith Lo Bue has been involved with. 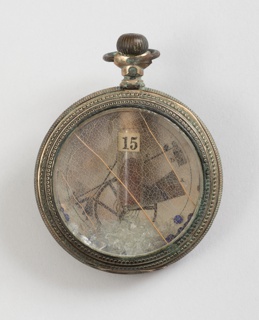