Doris Betz trained as a student in jewelry and metalsmithing at the Academy of Fine Arts in Munich under both Otto Künzli and Herman Jünger, and continued at the school as Künzli's assistant from 2006 to 2009. Betz has received many awards, including the Herbert Hofmann Memorial and the Bavarian State Award, and her work has been featured in public collections including the Neue Sammlung in Munich, the Stedeljik Museum in Amsterdam, and the Mint Museum of Art and Design in North Carolina. She has also been featured in various exhibitions, workshops, and publications on art jewelry. Her work primarliy explores the dimensions of linear form, and many of her pieces revolve around different ways line is... more.

We have one object that Doris Betz has been involved with. 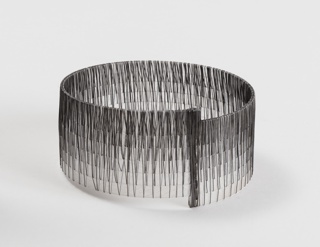 We know 3 people that Doris Betz is related to.