From 1999-2005 Austrian architect, Matthias Bär, studied at the Universität für Angewandte Kunst in Vienna, taking a master class with noted architect Zaha Hadid. He also studied at the Bartlett School of Architecture in London, England, between 2003 and 2004. After graduating from the Universität für Angewandte Kunst in 2005, Bär worked on projects for British designer Ross Lovegrove (2005-2006), and for Zaha Hadid (2006-2008). In 2008 he returned to Austria, working in the architecture firm of Oskar Leo Kaufmann, Albert Rüf ZT GmbH in the city of Dornbirn. He started his own firm in Dornbirn, Studio Bär, in 2014.

We have one object that Matthias Bär has been involved with. 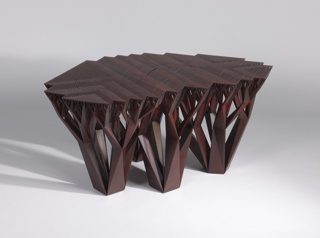