Humans since 1982 forge graphic and mechanical expression to create conceptual objects that expand traditional function. A specimen study of LEDs serves as a light. Analog clock hands become typography. Their work is unified in its elegance, if not its color palette—black and white—and most often explores the ephemeral qualities of time or light. Having met during their MA studies at Sweden’s HDK School of Design and Crafts, founders Per Emanuelsson (Swedish, b. 1982) and Bastian Bischoff (German, b. 1982) remain deeply curious about the natural and material realms, reflected through the lens of their respective fields. Emanuelsson had previously studied mechanical engineering; Bischoff, graphic design.

We have one object that Humans since 1982 (Swedish, founded 2010) has been involved with. 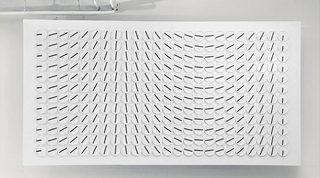