Giambattista Valli is the embodiment of contemporary couture. Although his couture collection began in only 2011, he is already recognized as one of the key figures of Paris’s Chambre Syndicale de la Haute Couture. Valli’s collections are celebrated for their intense romanticism, blending fantasy with simple, clean lines in garments that are inherently wearable. Each piece is meticulously crafted, with decadent fabrics and impeccable tailoring. His is an elegant femininity. Born in Rome and based in Paris, France, Valli studied fashion and illustration in Rome and London. He is a seasoned designer who has worked at Capucci, Krizia, Fendi, and Emanuel Ungaro. Valli launched his first collection, and... more.

We have one object that Giambattista Valli has been involved with. 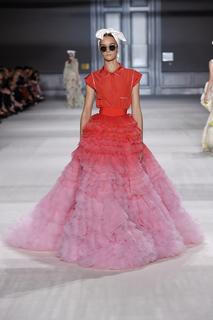