About four hundred pieces of furniture produced from 1907 through 1913 can be attributed to the hands of Peter and John Hall (1864-1940). Peter and John were born in Sweden and had immigrated to Illinois by 1872. Peter moved to Pasedena in 1886 and gained a reputation as a master stair builder. He then worked in Seattle, Washington and Port, Townsend, Oregon from 1889 through 1891 when he moved back to Pasedena. The Halls were employed by the millwork firm Pasadena Manufacturing Company beginning in the 1890s. In 1900, Peter left to start a contracting firm in 1902 that John later joined in 1906. John remained at Pasedena Manufacturing Company where he was named foreman in 1899, a position he held until... more.

We have one object that Peter Hall has been involved with. 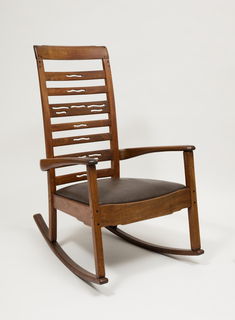