Silversmith William Comyns started his career in 1849 as an apprentice, and started his own business in London in 1858. His sons joined him in 1888, and the firm took on the name William Comyns and Sons, after which they enjoyed a large success in the 1890's producing a fair amount of silver wholesale, to be retailed by many of the top stores of the time, including Tiffany & Co of New York and Paris, the Goldsmiths and Silversmiths Company in London, and Shreve in San Francisco. The produced hand-crafted and mass produced silver, including using dye stamps. When the Art Nouveau and Arts and Crafts movement became popular, they used a restrained decoration for the former, to appeal to a broader market.

We have one object that William Comyns and Sons has been involved with. 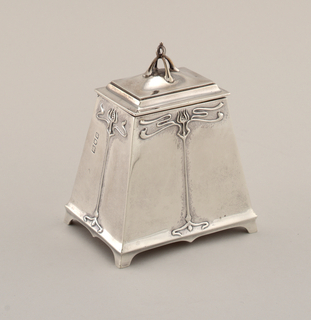