Sims is an artist and designer who works across various disciplines including interactive and industrial design, architecture, robotics, and fabrication. Originally from Nashville, TN, Sims received a Bachelor's of Architecture degree from Pratt Institute, where he developed research interests in network+swarm theory, biomemetics, minimal surface morphologies, and computational form finding. Then Sims completed a Master's of Tangible Interaction Design from Carnegie Mellon University's Computational Design Lab. In 2012 he received a Prix Ars Electronica Award for the Free Universal Construction Kit. His work has been exhibited internationally and featured in numerous print and web publications. Shawn is... more.

We have one object that Shawn Sims has been involved with. 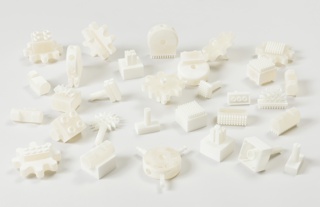