The corporate history of Hackman begins in the late 18th century when the émigré Johan Friedrich Hackman from Lübeck, Germany established a trading house, timber business, flour mill and brickworks in the Hanseatic city of Vyborg. By 1933, Hackman’s son by the same name had become full owner of the Sorsakoski estate in Finland, which developed into an industrial center that included the Sorsakoski knife factory. In 1902, Hackman began manufacturing low-cost cutlery forged from a single piece of steel. The introduction of stainless steel in the 1920s expanded design possibilities and increased durability of their products. In the 1950s, the Sorsakoski factory began manufacturing coffee pots, saucepans,... more.

We have one object that Hackman has been involved with. 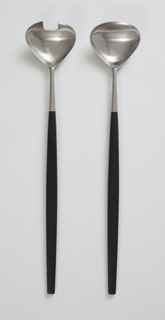