Founded in 1887 by brothers William and Francis Winslow, Winslow Brothers Company was one of the premier manufacturers of ornamental iron and bronze in the United States. As early as 1881, William Winslow was employed in foundry work with the Helca Iron Works of New York. He became a partner in 1883. In 1885, William moved to Chicago and joined E.T. Harris to form the firm Harris and Winslow. After Harris retired William and his brother Francis formed their own company, first listed in a Chicago directory in 1887 at 99-109 West Monroe Street with William as president and Francis as secretary and treasurer. The company earned commissions across the country, designing stair balusters, signage, elevator... more.

We have 2 objects that Winslow Brothers Company has been involved with. 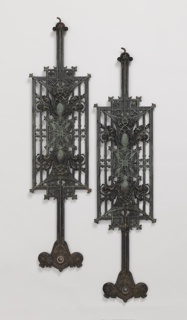