As a fashion designer, Helmut Lang is associated with the pared-down, urban aesthetic of the 1990s. He is considered a part of the mid-1990s minimalist fashion movement. He is also known for introducing a new aesthetic to menswear, for which he won the CFDA Award for Menswear Designer of the Year in 2000. Lang's cerebral approach and sometimes esoteric references never interfered with his ability to produce commercially successful and highly wearable garments. Olivier Saillard, curator at the Musée de la Mode et du Textile in Paris, writes, "Lang has reconciled a commercial fashion audience with a highly personal and discreet approach, but one that does not fall into the trap of excessive... more.

We have one object that Helmut Lang has been involved with. 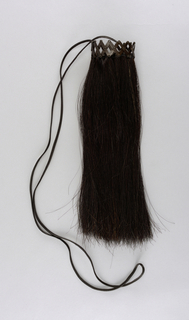