Born in Paris and woked in Rome from about 1845 to 1898. He was most well-known for his jewelry in the Etruscan style. "Pierret is first recorded as a working jeweller, of 55 via Borgogna, though no initial is given, in Murray's Handbook for Central Italy and Rome of 1850. By the 1853 edition, his address, still with no initial, is given as 31 Piazza di Firenze, with the comment the he is 'now one of the first artists in Rome for Etruscan jewellery, and is more moderate in his charges than Castellani'. The Libro Per Turri, an artistic and commercial guide to Rome of 1866, records Ernesto Pierret at 36 via dell' Umilta, but the Murray Handbook to Rome of 1867 records Pierret at 20 Piazza di Spagna and... more.

We have one object that Ernesto Pierret has been involved with. 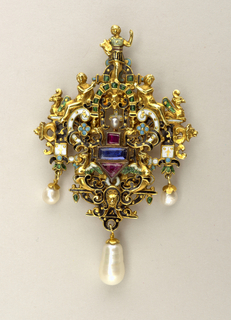