Founded in 1827 as H. Nott & Co, in Albany, this firm relocated to New York City in about 1830. After going into receivership in around 1837, the firm's manager Thomas B. Stillman joined John D. Ward, Robert M. Stratton and C. St. John Seymour to purchase the business which was renamed Ward, Stillman & Co but also, apparently, Seymour & Stratton. The first two managed the plant, which the latter managed the financial affairs. After Ward retired in 1841, an engineer named Horatio Allen joined the firm, and the firm's name changed again to Stillman, Allen & Co. A later name -The Novelty Iron Works company was formalized with incorporation in 1855 .

We have one object that Stratton & Seymour has been involved with. 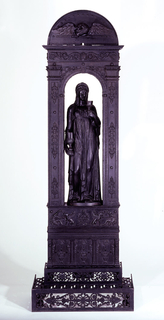