At age 16 Oculus VR's cofounder Palmer Luckey began building virtual reality headsets.He worked as an engineer at USC’s Mixed Reality lab, experimenting with VR and head-mounted displays. John Carmack, a leading software developer, expressed interest in one of his headsets. In June of 2012, Luckey, along with Brendan Iribe, who became CEO, formed Oculus VR. On August 1st of 2012, Oculus launched their Kickstarter campaign to pay for costs of parts, manufacturing, and shipping. Within 24 hours, they’d raised $670,000 from 2,750 people. Within three days, pledges reached one million dollars.They released the development kits Oculus Rift DK1 (March 2013) and Oculus Rift DK2 (March 2014) to backers via... more.

We have one object that Oculus VR has been involved with. 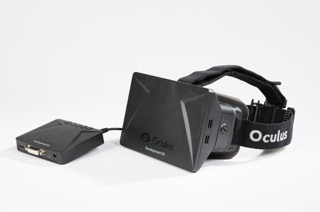