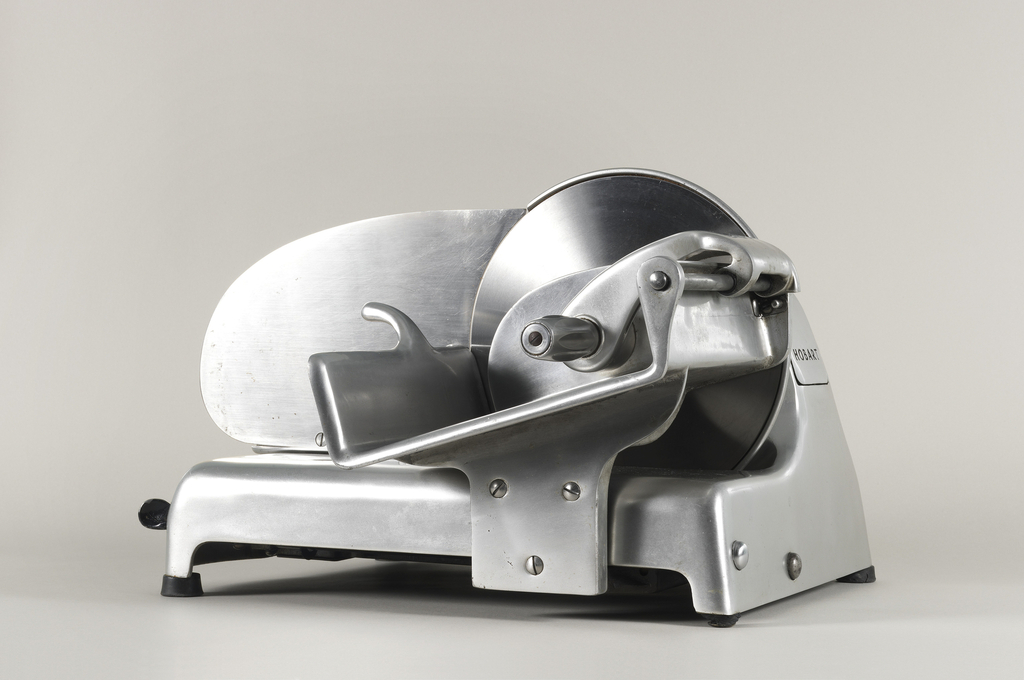 This is a Meat slicer. It is dated 1940 and we acquired it in 2008. Its medium is aluminum, steel, rubber. It is a part of the Product Design and Decorative Arts department.

This meat slicer is an iconic example of American industrial design by Egmont Arens. The model 410 is a utilitarian object intended for commercial rather than domestic use. It is a fine example of streamlining, a style of modernism that combines principles of aerodynamic engineering with functional geometry, often characterized by smooth rhythmic surfaces and forms associated with technology, mechanics, and motion. In the model 410, the predominantly aluminum body is composed of planes, curves, and geometric shapes (circle, oval, rectangle) that overlap and combine in a way that suggests dynamic movement. The only exposed moving parts are the simple forms of the circular blade and the sled-like bed and pivoting holder that secure the meat to be sliced. The motor, gears, and other moving parts are concealed within a sculptural smooth-walled housing.
Known primarily for his influential writings on industrial design theory and practice, Arens was among the individuals who launched the industrial design profession in America during the 1920s and 1930s. His contemporaries included Walter Dorwin Teague, Donald Deskey, Norman Bel Geddes, Russel Wright, and Lurelle Guild, all of whom are represented in the museum’s collection.
Like several of his colleagues, Arens segued into the then new field of industrial design from another creative profession. He came from a publications and editorial background but, by 1929, became advertising director of the firm Earnest Elmo Calkins, where he established an industrial design styling department based on what he called “consumer engineering.” In 1932, Arens and Roy Sheldon co authored the book Consumer Engineering: A New Technique for Prosperity, primarily intended for a business and design audience.
Arens’s design work was shown in the 1939 New York World’s Fair and he was one of the 15 design practitioners who founded the Society of Industrial Designers in 1944. Throughout his career, he worked for companies such as General Electric, Fairchild Aircraft, The Carborundum Company, the Dayton Scale Company, Coca-Cola, and the Great Atlantic and Pacific Tea Company (more commonly known as A&P), producing a diverse range of designs including freight cars, airplanes, coffee grinders, refrigerators, candy, graphics, and packaging. Among his best known work is his 1937 Model K stand mixer for the Hobart Manufacturing Company. KitchenAid still manufactures the mixer today, little changed from the original design.
The Hobart Manufacturing Company (now Hobart Food Equipment) started in 1897 as the Hobart Electric manufacturing Co. in Troy, Ohio, founded by engineer Herbert Johnson. By 1905, Hobart expanded from manufacturing electric motors, to making motor-driven choppers, mixers, and other food processing machines for both the commercial and consumer markets. In 1930, Hobart introduced its first electric meat slicer, the model 11-A. With its motor and parts visible, it was an efficient but awkward looking machine that was difficult to keep clean. Hobart engaged the services of Arens, who designed the streamlined model 410 with its practical aluminum body that was not only modern looking, but sanitary and easy to clean—important and necessary features in the food industry.
This design would strengthen the museum’s collection of American industrial design of the 1930s and 40s, an area of top collection interest.

This object was featured in our Object of the Week series in a post titled A Slice of Design from the Local Deli. 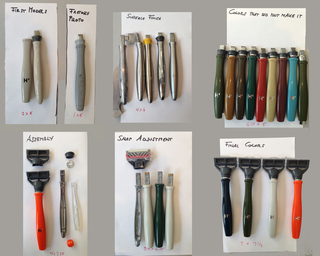 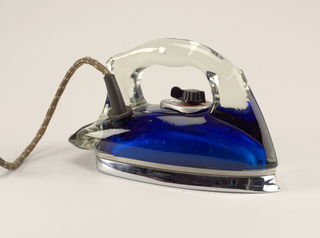 On left and right sides of base: "HOBART" in black

This object was previously on display as a part of the exhibition Energizing the Everyday: Gifts From the George R. Kravis II Collection.

The Conservation department has taken one photo of this object.